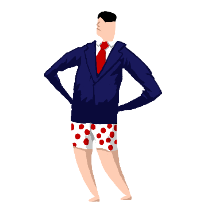 The Underperformer award is given out to the member of the CSN crew who failed to live up to expectations.  This person isn't the worst member of the crew.  They don't lack skills and talents to make them a successful broadcaster.  On the contrary they possess both of those things, but for some reason was unable to use them to score points this season.  This years underperformer award goes to Chick Hernandez.

Chick isn't a bad broadcaster.  He is pretty personable, seems to try to do his job well, and can sound down right distinguished at times during his highlight recaps.  He also gets plenty of air time, normally at least one game a week he finds himself handling intermissions.  So why did he only manage to score 1 point this season?  It is actually quite hard to put a finger on.  He doesn't normally make huge mistakes and I rarely come away from his broadcasts with anything other than a smile.  It just felt like he lacked a little bit of fight this season.  He didn't seem to WANT to win.  That is until he found out he was in danger of finishing the season without any points.  He showed up during the last game of the season and made sure he finished in the top 3.  It is that kind of attitude that he needs to carry into next season to make the most out of his opportunities.