In a game that I thought the Caps would struggle to score 1 goal, they put up 4.  Big win for the team at home.  Fair warning, I was driving home from College today and got stuck in traffic, so I missed the pregame!  Here is your stars for the night: 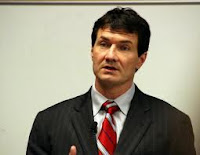 Alan May.  May was back after his long absence from the broadcast during the road trip.  Paired up with his normal partner Rob Carlin, he handled the post game show.  In a night where everyone was talking about how great of a game the Caps played, May made sure to keep us grounded by pointing out how the team disappeared during the 2nd period.  In talking about Knuble's 1,000th game, Alan said he looks like a male supermodel.  Rob Carlin took that opportunity to take a shot at May, who was not amused.  Later in the show, Carlin made another bad joke when Smokin' Al's mic wasn't working and May gave him a death stare.  Big points for May's three keys to the game.  He said Ovie needed to score more and the powerplay had to produce.  Check and Check.  Does Alan May know hockey, or does he know hockey?

Locker gets the nod in the 2nd spot tonight.  Good job color commentating, no stand out calls but no major blunders.  He was also back on the telestrator for the first time in awhile and he didn't miss a beat.  His "Hold it Here" count for the night is 9.  Keeping that in single digits is quite a feet for Locker so he definitely gets points for that.  Early in the game Locker told the fan's not to worry, "the goals will come".  Surprise, surprise a few minutes later Ovie buried the first goal of the night.  Four more would follow, with all the big stars getting in on the action so its safe to say Locker called it.  Locker was also wearing a big "22" button on his suit jacket, which was a nice show of support for Knuble.

Julie Donaldson.  Julie was back in championship form tonight.  She handled the first intermission and the intimidate post game show tonight in a really nice black dress jacket and dark blue shirt that said "I'm ready for business".  She ran through the highlights with emotion and precision.  She not only got the calls right, but it really seemed like she loves what she is doing.  People like Jill Sorenson could take a page out of her book on how to not seem like a robot.  (I'd say Gormely, but he is beyond fixing and may, in fact, be a robot).  Julie never stopped smiling all night and her sign off was "Go Caps".  Its always nice to see some team spirit.  With all the other Sportsnet anchors it seems like a job, but with Julie its feels like a passion.  She even had the ability to make me forget that Jenkins was her co-host, so I very much appreciated that.  Inspiring stuff tonight.

Carlin:  Stop trying to make jokes. May is not amused, will never be amused, and you are not friends.

Smokin': Does he spray tan?

Jenkins: Wearing a vest and pink tie without a jacket.  Had a "no that's not a roofie I put in your drink" look on his face the whole night.

Jill Sorenson:  Wore all black and stood in front of an all black background. Meet Jill the floating head.

Chuck Gormely.  Ehhhhh Chuck we missed you.  On a big night for Mike Knuble, Gormely decided it would be appropriate to make his segment about Knuble.  Good thinking Chuck, how could you screw that up.  Well bringing up Knuble's dead Dad was a good way to do just that.  Out of all the fantastic, hockey-related, achievements of Knuble's career Chuck decided to talk about his Dad who died when Knuble was 15.  He didn't even make an effort to tie it back into hockey.  Nope just dropped the "dead-dad" bomb and walked away.  He didn't even show a shred of what could be called an emotion.  Heartless.  Cold.  However, I did learn something new from Chuck's performance tonight.  I was so confused that he decided to talk about Knuble's father, instead of anything else about his playing career, that I asked myself, "how does Chuck Gormely do his research."  Well in the third sentence under "Playing Career" on Knuble's Wikipedia page it mentions his father's death.  Mystery solved.  Apparently all it takes to be an inside blogger is Wikipedia.  You may now refer to me as, Dru "Capitals Insider".

Twitter is @Dru90. Next game on Friday in New Jersey.  See you then!